Places To See
Empire Stores
Location
Open Website
How To Get Here
Open
Parking is limited, so we encourage you to take public transportation. And lucky for you, there are plenty of transportation options.
Be the First to Know!
Subway
Clark Street
High Street or Jay St- MetroTech
Borough Hall
York Street
Bus
B25 (at Fulton Ferry Landing), B61 (at Atlantic Avenue and Hicks Street), B63 (on the loop road near Pier 6 in the park), or B67 (at Jay Street and York Street)
CitiBike
Nearby CitiBike stations: Atlantic Ave & Furman St (Pier 6); Brooklyn Bridge Park - Pier 2; Old Fulton St (Pier 1); Water St & Main St (Main Street)
NYC Ferry
East River route to Dumbo/Fulton Ferry; or South Brooklyn Route to Brooklyn Bridge Park Pier 6/Atlantic Avenue or DUMBO/Fulton Ferry.
Places To See

Located in the northern section of Brooklyn Bridge Park in the neighborhood of DUMBO, the seven contiguous warehouses of Empire Stores were built between 1868 and 1885. Thick exterior walls of red brick and schist interior walls kept the inside dark and cool – a perfect environment for storing perishables. The Stores held goods like sugar, molasses, wool, rubber, and most notably, coffee.

At the time the Stores were built, Brooklyn was America’s coffee capital. In the late 19th and early 20th centuries, the vast majority of the country’s coffee supply arrived through New York Harbor. The Arbuckle Brothers, early pioneers of the coffee industry, operated a sprawling complex of coffee production facilities adjacent to Empire Stores. When they added the Stores to their campus, it joined their other warehouses in storing their best-selling Ariosa and Yuban coffee brands.

Empire Stores continued in this role even as shipping along the Brooklyn waterfront slowed and other warehouses began to empty. In the 1940s and ‘50s, many warehouses were torn down to make way for the Brooklyn-Queens Expressway and the Brooklyn Heights Promenade. In the 1960s, Empire Stores was abandoned. When the area became an historic district in the late ‘70s, it was one of the last remnants of the waterfront’s rich shipping period.

The following decades saw further deterioration and a few failed development attempts, until 2012, when BBP released an RFP for the development of the historic site. Realizing DUMBO’s rebirth as a tech hub and a center of economic activity, they proposed to fill Empire Stores with office and retail space alongside a number of public amenities.

Now we are able to enjoy its public roof, shops and restaurants. Empire Stores enjoys its return to its former status as a centerpiece of Brooklyn’s shoreline. While it used to exemplify the borough’s shipping and industrial strength, it now stands for Brooklyn’s resurgence as a world-renowned destination. Article
The Storied Past of Empire Stores 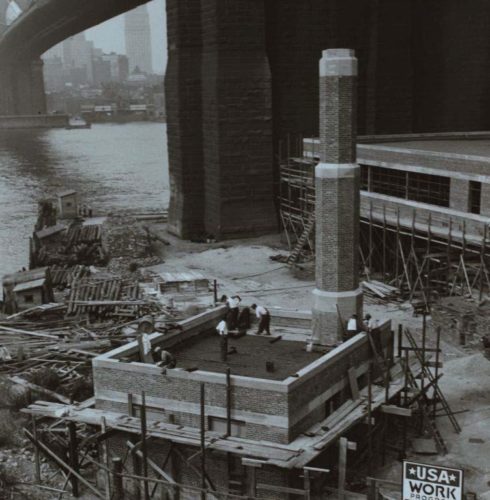 Article
A Chimney and the Changing Waterfront