Brooklyn Bridge Park operates under a mandate to be financially self-sustaining. This mandate was memorialized in the Park’s General Project Plan approved in 2005 and the General Project Plan approved in 2010. While a small fraction of the required operations and maintenance funds for the Park are collected from permits and concessions, the majority of the funds come from a limited number of revenue-generating development sites within the project’s footprint.

The development program was determined after an in-depth analysis of potential locations. The analysis focused on finding uses that would generate sufficient revenue to support park operations, minimize the size of the required development footprint, and be compatible with the surrounding park and neighborhood uses. Development locations were chosen to take advantage of the existing urban context by concentrating development closest to existing park entrances and maintain the protected view corridor from the Brooklyn Heights Promenade, and thus create vital, active urban junctions at each of the Park’s three main entrances.

The Pier 1 development occupies, approximately, the footprint of the National Cold Storage Warehouses, a complex of buildings that blocked views for over a century. The warehouses were demolished in 2010 to make way for parkland and the Pier 1 development that had been approved as part of the 2005 Brooklyn Bridge Park General Project Plan (GPP).

While many people do not recall the visual impact of the old warehouses, it was understood that from some vantage points, the Pier 1 development would obstruct views of the Brooklyn Bridge and Manhattan – particularly from the northern end of the Promenade and from the “Fruit Street Sitting Area,” which is not part of the Promenade.

In order to clear up some misunderstandings regarding the project, following is a list of pertinent facts. 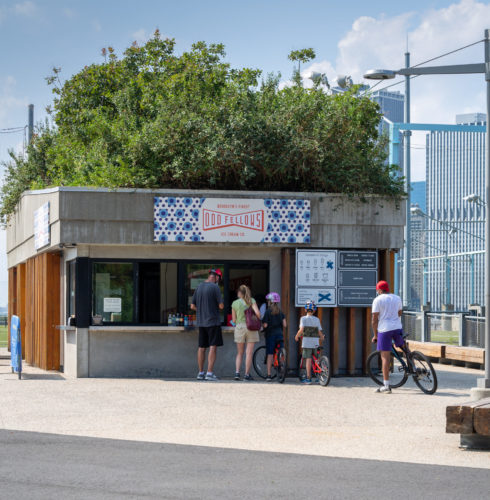 Macy’s Fourth of July Fireworks WILL NOT BE VISIBLE from Brooklyn Bridge Park.