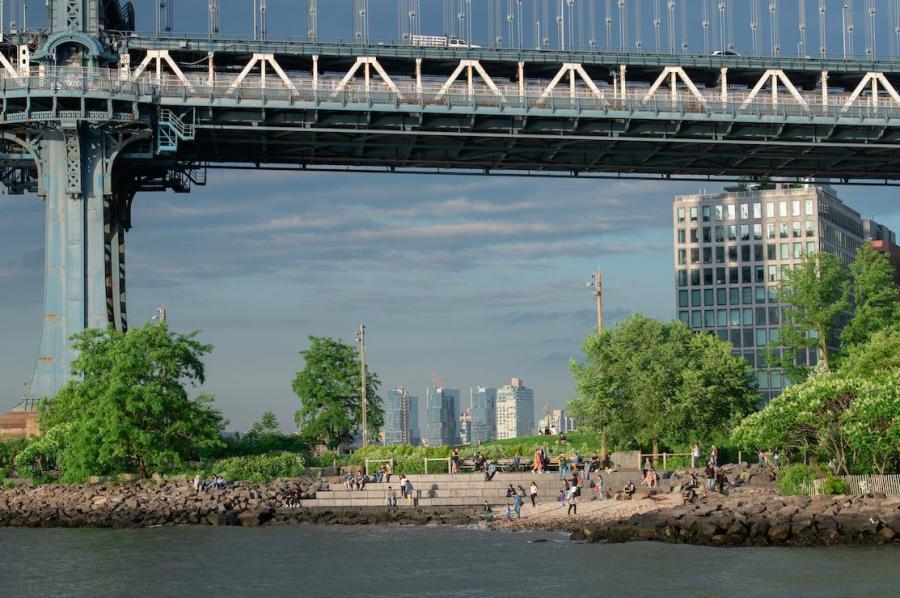 Brooklyn Bridge Park is an 85-acre post-industrial waterfront site 1.3 miles along Brooklyn’s East River. The Park runs from Jay Street, north of the Manhattan Bridge, to Pier 6 and Atlantic Avenue in the south. The site is long and narrow with a jagged edge formed by its piers.

Beginning in the mid-1600s, boats and small ferries started providing transportation along the river to support what would become a growing trade economy. But it was the creation of Robert Fulton’s steam Fulton Ferry Company in 1814 that revolutionized travel and trade between Brooklyn and Manhattan Island.

Railroad lines were installed at the Fulton Ferry Landing in the 1850s followed by the construction of massive brick warehouses, most notably the Empire Stores warehouse. Smaller storage warehouses were built alongside the ferry landings and small “finger piers.”

But the urban redevelopment of the 1950s briefly revitalized the area, with the construction of the Brooklyn-Queens Expressway, the demolition of smaller, older piers and construction of 13 larger piers that could accommodate larger ships and cargo between 1956 and 1964. However, trade technology and transportation advanced quickly, and by the 1970s, much of the Brooklyn waterfront was largely barren, decrepit, and abandoned.

To learn more about the dynamic history of the Brooklyn waterfront and the origins of BBP, click here.

Brooklyn Bridge Park has been the result of extensive planning and community advocacy for many decades.

After the close of its cargo operations in 1984, the Port Authority announced plans to sell the piers for commercial development. This caused a reevaluation of the site’s value as a public resource.

In 1998 the Downtown Brooklyn Waterfront Local Development Corporation was created to undertake a public planning process for Brooklyn Bridge Park. The result was the September 2000 Illustrative Master Plan, which presented a conceptual framework for the waterfront park.

On May 2, 2002, Governor George Pataki and Mayor Michael Bloomberg signed a Memorandum of Understanding (MOU) dedicating state and city funding for the park’s construction and the creation of Brooklyn Bridge Park Development Corporation (BBPDC) to oversee its design and construction. An important mandate of this agreement is that the park is required to be economically self-sufficient in its ongoing maintenance and operations. The long-term funding is provided by revenue-producing development and is a required component of the Park project.

In 2004, BBP DC hired the landscape architecture team of Michael Van Valkenburgh Associates to lead an intensive planning process and prepare a master plan for Brooklyn Bridge Park. In 2005, the Master Plan was released, environmental reviews were completed and the General Project Plan was approved (and subsequently modified in 2006 and 2010). Ground was broken on the park in February 2008.